You are here: Home / How to guides / Auckland storm damage tree service and emergency tree removal

Storm damage tree service blog post – Like most Arborists, we have been flat out after the storm that hit in early April. The unusually strong winds brought many trees and branches down. This has kept Auckland tree workers busy for the weeks following. There have been several storm damage tree service technical jobs. Giving us a chance to put our thinking caps on to solve the array of situations we have faced. The storm had a significant impact on many Aucklanders

With up to a quarter of homes without power at one stage. Many homes were without power for over a week. Cars and houses were struck by falling limbs and trees. Many roads and driveways were blocked. A question I ask myself as an Arborist in such a situation is “How much of the damage due to trees could have been prevented?”

As trees grow there is a trade off between using energy to make themselves stronger and using it for all of their other processes. If trees only concentrated on making themselves strong they would not have enough resources left for gathering more energy or reproducing. A result of this trade off is that trees grow to be just as strong as they need to be to survive the probable weather events they will face (in the environments that they evolved in). On the night of the storm a gust of 146 km/h was measured at the sky tower and a weather station at Manukau heads recorded a gust of 214 km/h. With winds of this speed even healthy trees can fail.

What was interesting as an Arborist travelling around the city after the storm was seeing which trees failed and which trees did not. I was interested to see if there were any surprises; trees that had failed with no warning signs. You must take into account that this is just one person’s observations and that I did not see all of the trees that had failed. But, for the most part there was easily recognizable evidence of why each tree had failed and that evidence would have been visible while the tree or branch was standing. The majority of trees I viewed that had failed were exotic species. Due to the warm, sunny climate of Auckland with its high rainfall exotic trees often grow much faster here than they do in their home environments. A by-product of this is that they are weaker and more prone to failure.

Contact us to review any exoctic trees on your property.

The branches of trees that had failed were either over extended or had a structural weakness such has included bark, dog legs (sharp angles), or cavities. The complete tree failures that I saw had either restricted root zones, roots that had been cut to make way for driveways or foot paths, had poor stem taper, or large areas of decay. Trees growing individually were also much more likely to fail than those that formed part of a group. My observations were by no means a complete review of all the damage, however, clean patterns of failure were visible. Book our storm damage tree service to help prevent less storm damage.

So, to come back to the earlier question of whether the damage could have been prevented the answer would be in some cases yes and in some cases no. The majority of the faults in the trees I saw would have been visible prior to failure and would have been identified during a tree inspection. What the individual Arborist who had identified the faults would then have recommended is another matter, however, measures could have been taken in some of the instances which would have significantly reduced the chance of failure. This to me highlights the importance of having a suitably qualified and experienced Arborist assess your trees on a regular basis. If your trees have targets (houses, driveways, gardens, roads, footpaths, etc) near them then their failure is likely to have a consequence. 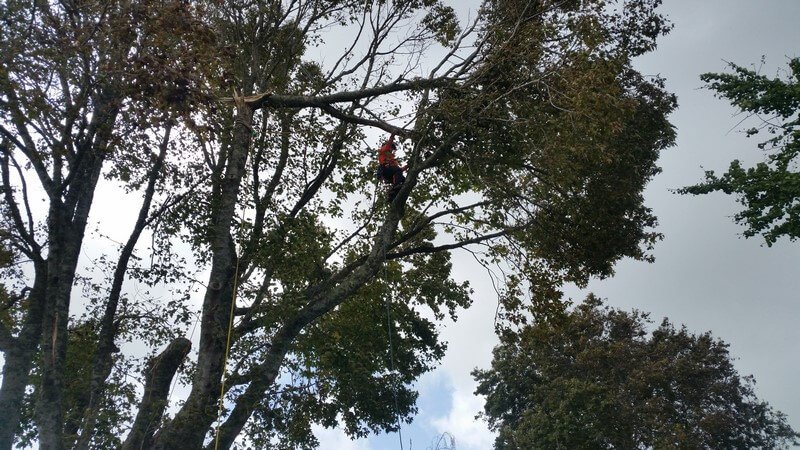 Having the right tree in the right place can have a big effect on the likelihood of that tree to fail. Fast growing exotic species that have little or no protection from the wind are at a much higher risk of failure than slower growing species or trees growing as part of a group. Combine this with any of the other factors such as compromised roots or structural faults and failure becomes much more likely.

Some believe that removing trees is the solution to a safer environment, but we only need to look back in time to see where this has lead to even greater destruction of the populations living environment (dust bowl effect in New Zealand and the USA). The risk trees can pose can be managed at an acceptable level by your qualified arborist, but this requires a commitment from the tree owner to do regular inspections and maintenance.

Pro Climb was founded on the idea that trees require the utmost respect and care and are an asset that can enhance your property. With that in mind, we scoured the country looking for tree contractors … END_OF_DOCUMENT_TOKEN_TO_BE_REPLACED