Veteran Oak Tree Pruning Case Study. Pro Climb was recently contracted by Tree Care Auckland to perform pruning works on a veteran oak tree located in central Auckland. The tree in question has entered the latter stages of its life cycle and as such had developed several structural and physiological defects. The tree had shed limbs in the past and concerns were raised over its safety. 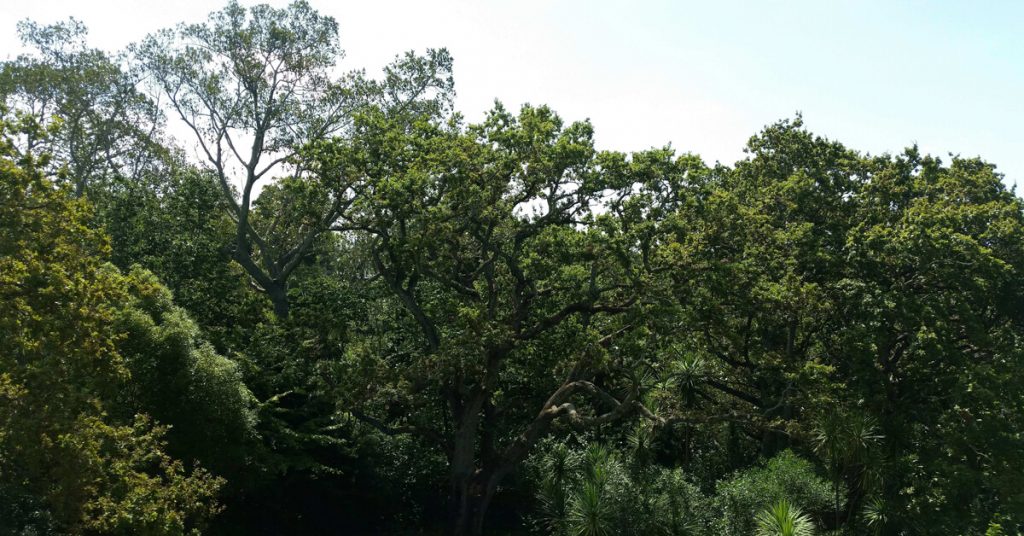 Initial inspection of the tree revealed a number of faults both in the crown and on the trunk. The tree had substantial amounts of large diameter deadwood and the outer canopy was showing signs of decline. Many of the main scaffold limbs had wounds where they had lost branches and it was reported the tree had a history of limb failure. The trunk of the tree also had an open wound which was starting to decay.

Located in the garden of a heritage building, the tree offers significant landscape value to the homestead and surrounding area. The fact that the tree borders a reserve also causes it to have high habitat value. The tree is located close to the rear border of the garden and investigation revealed the use of the area beneath the tree on the garden side was infrequent, however, people did use that area at times. Beneath the tree on the other side of the boundary is a council reserve consisting of dense woody undergrowth indicating that people would not venture under the tree on this side. 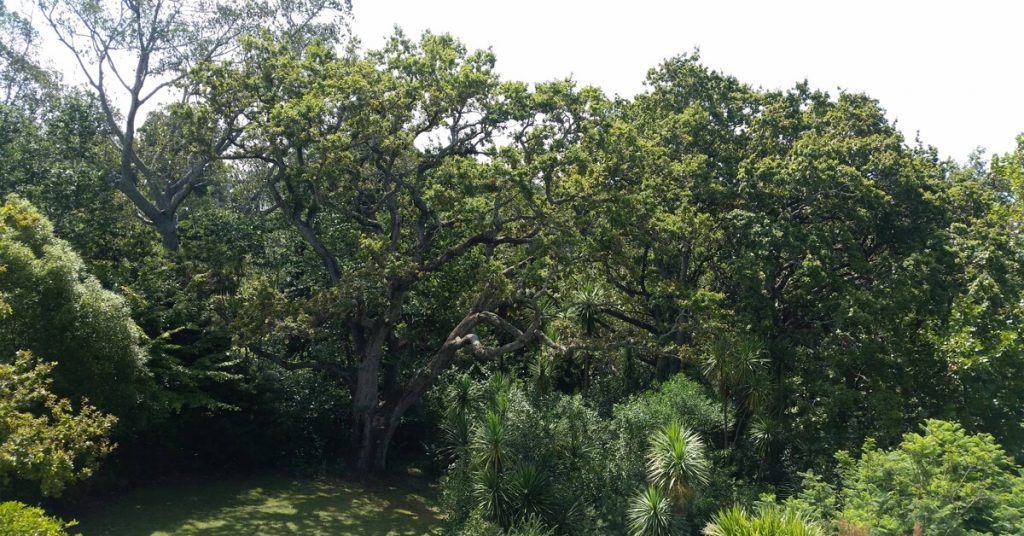 Oak Tree Pruning allowed the Tree to be Retained

Given the high landscape and habitat value of the tree and the infrequent use of the land beneath it, it was decided that pruning the oak tree would enable it to be retained with a degree of safety and leave its landscape and habitat values intact. It was decided to reduce the existing canopy of the tree in stages over a number of years, allowing an inner secondary canopy to develop, ensuring continued leaf cover (for photosynthesis) throughout the process.

By reducing the tree in stages the stress on the tree as it transitions is limited, allowing the leaf area and root area to balance each other. The reduction will lessen the sail area that the tree presents to the wind and remove weight from over extended limbs, lowering the chance of branch failure in the future. 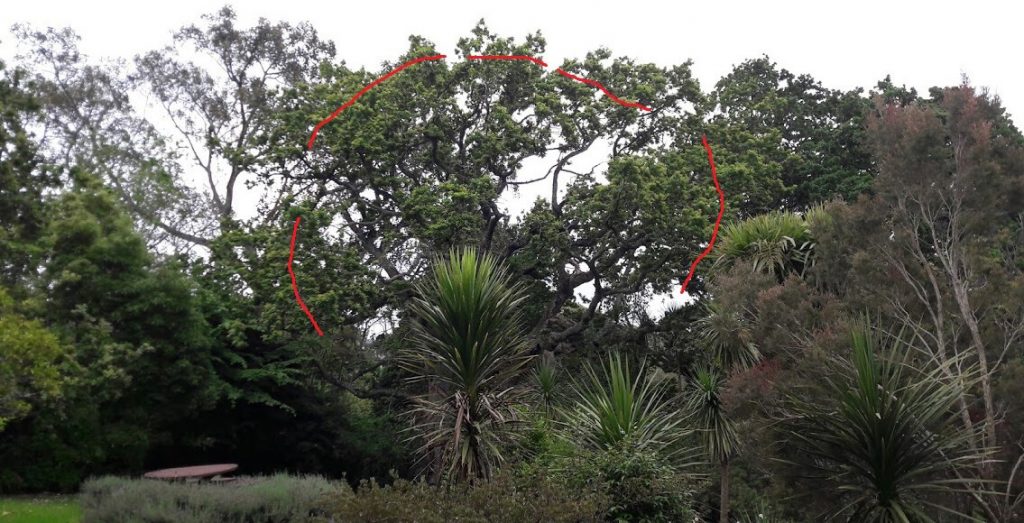 Prior to the work taking place a safe method of work was decided. The hazards were identified and solutions were found to reduce the risk of those hazards. Due to the lack of vehicular access to the tree, the canopy would need to be accessed via climbing rather than an elevated work platform.

Modern single line climbing techniques were used with the climbers installing several redirects to ensure their safety and prevent large swings. The faults in the oak tree were noted and the climbers inspected any suspect areas to make sure they were happy before proceeding past them. Light rigging was used to lower some of the branches to protect the garden beneath. Some of the deadwood that was removed from the canopy was left at the base of the tree so as not to denature the site. 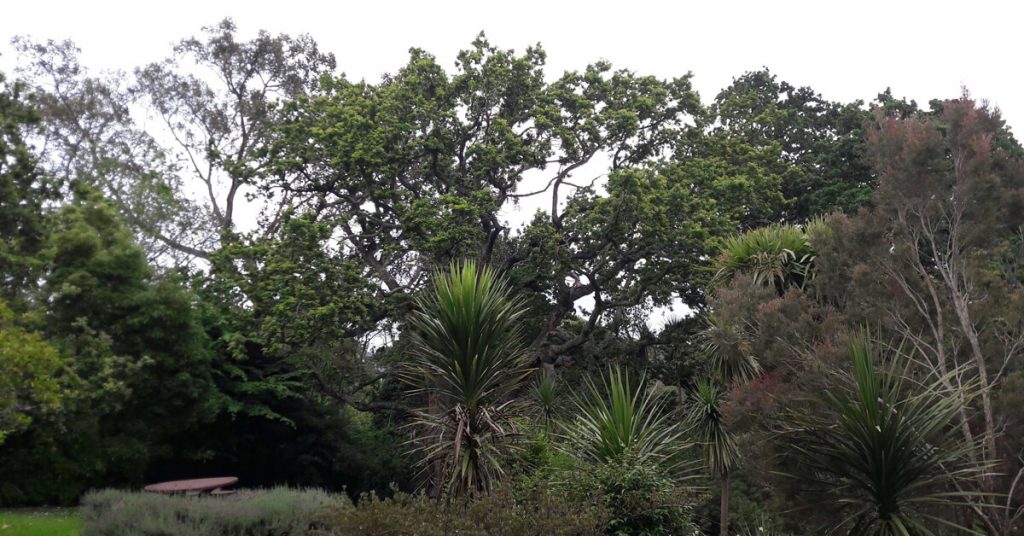 The oak tree pruning reduction was carried out successfully and, despite a significant volume of the canopy being removed, the oak tree retained its atheistic value. The climbers were careful not to remove or damage any of the inner growth of the canopy. It will be this growth that helps to establish the new canopy.

The next stage is to wait and see how the oak tree responds. It is hoped that the tree will produce epicormic growth (growth from dormant buds). Once there is a good covering of new growth on the inner canopy the tree can be reduced again. This process will be continued until much of the weight of the old canopy has been removed. It is hoped that through this process the tree will be retained with all its characteristics, benefiting the local area and its inhabitants for many years to come.

Pro Climb Tree Care is headed by the internationally experienced arborist Andreas (Rossy) Ross. Rossy grew up in Germany and the USA and immigrated to New Zealand in 2006. He has worked in the tree care industry for about 20 years. Rossy is a qualified forester, master arborist by trade (NZQA qualified), and industrial abseiler with passion for his work.

Find out more about Rossy visit his, Facebook Page or visit our About Us page.

Pro Climb is a member of

What Pro Climb is about

The Company Pro Climb was founded in 2009 as a sole trading venture. Providing contract tree climbing services to the tree care industry in Auckland, New Zealand. In 2010 Pro Climb started its first series of arborist training workshops in modern tree climbing and rigging. In 2015 we started our Tree Care Auckland brand.

Learn more about us