Fallen Oak Tree Crane Removal Case Study. Pro Climb was recently contracted by an Auckland based arboriculture contractor to assist in the removal of a mature Oak tree that had fallen onto a house. Many of the limbs had shattered on impact with the house leaving the remainder of the tree precariously balanced. Removal of the tree would require the use of a crane and an improvised fall protection system to ensure safety throughout the job.

The Oak tree in question was growing on a bank to the rear of the property. It was brought down after a period of heavy rain and winds, landing on the house at approximately 5.30am. Luckily the house was vacant at the time and no one was injured. Due to the tree being positioned uphill from the house, and nothing breaking the fall of the tree until it made contact, the impact was at high speed and dispersed a considerable amount of force. The house was severely damaged and the large limbs of the tree shattered, leaving them loosely balanced on the roof.

How we approached the Oak Tree Crane Removal

Tight access to the driveway at the front of the property restricted the size of crane that could be brought in to lift the tree sections from the building. As the boom of the crane was close to its maximum reach the working load of the crane was significantly reduced. These two factors meant that accurately estimating the loads prior to lifting was essential to ensure the crane was not overloaded and that the tree could be removed efficiently.

Palm trees on either side of the house were identified to be used for installing a fall protection system and for access to the roof in case of an aerial rescue. A high line running between the trees was installed, which the climber could attach to, enabling them to move around the roof safely. This was later changed to a conventional tree climbing system on each of the surrounding trees as the high line would prevent certain sections of the tree being lifted.

As the branches had broken up and were laying closer to the crane (therefore effectively increasing the lifting capacity of the crane) they were well within safe working load limits. The larger branches were cradled using two or more slings so that they could be removed from the roof in their same orientation to prevent further damage to the house. Smaller branches were bundled before being craned out to the chipper.

The crane was at maximum reach for the timber and had a low lifting capacity. The sections to be lifted were estimated by measuring their volume and using a timber calculation for the tree species in question. A safety factor of 3 to 1 was used; the estimated weight must be less than a third of the lifting capacity. After receiving actual weight information after the first few lifts estimating the weight became very accurate and the safety factor was reduced to 2 to 1.

Once the tree had been safely removed tarpaulins were spread on the roof and tied down to protect the house against the elements before repairs to the house take place. 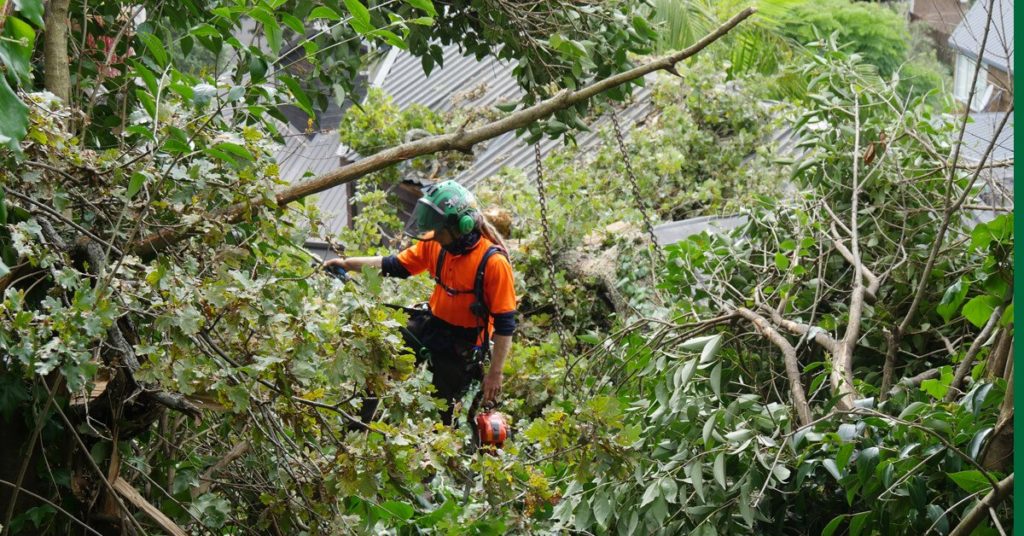 Accurate estimations of the lifted sections, and good communication via radio between the climber and the crane operator, ensured the tree could be removed safely and efficiently without any further damage to the property. 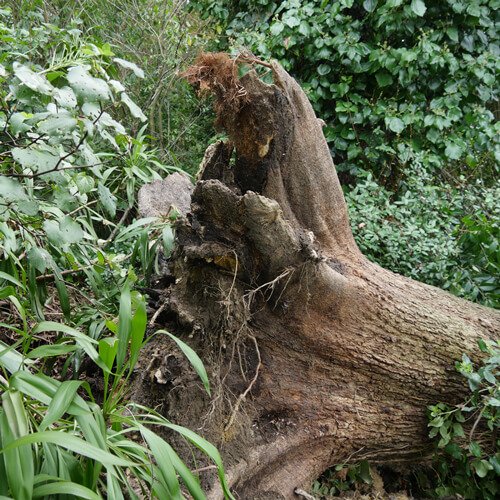 Pro Climb was founded on the idea that trees require the utmost respect and care and are an asset that can enhance your property. With that in mind, we scoured the country looking for tree contractors … END_OF_DOCUMENT_TOKEN_TO_BE_REPLACED