Fungi friend or foe? Fungi (or mushrooms) can be mysterious things. Most peoples’ experience of fungi is limited to the 2 or 3 kinds that are most commonly eaten. It is estimated that there may be more than 3 million species of fungi, this outnumbers tree species by a factor of 5. It is an estimate because there is a constant stream of new species being discovered. Fungi were the first organism to make it onto land about 500 million years ago meaning that everything on land (including us) has fungi as a common ancestor. 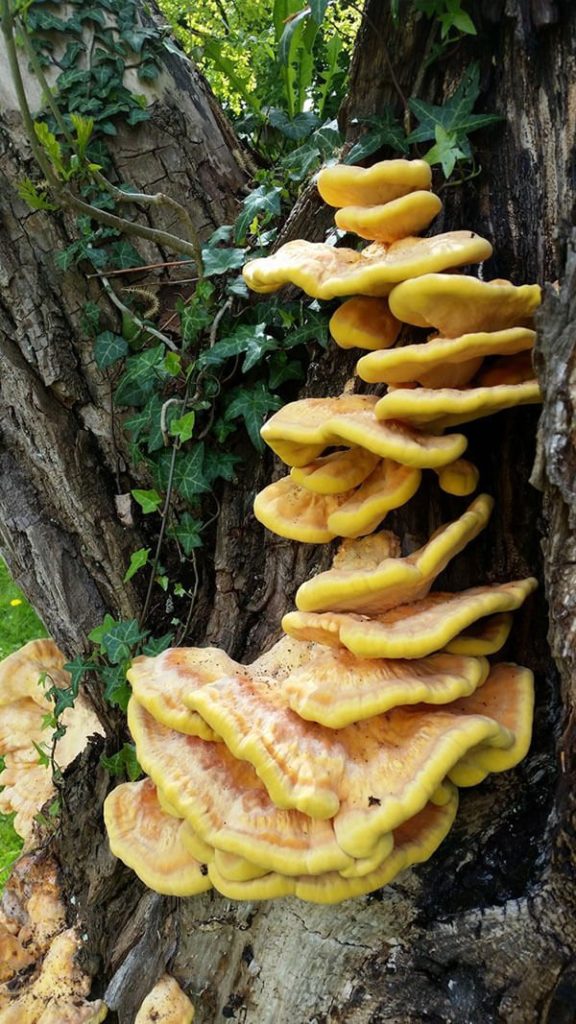 The vast majority of a fungus is contained beneath the ground or within whatever it is eating.

The mushroom or conk that it produces is often only a small indication of what is actually there. There is evidence of a long historical use of fungi by humans for both food and medicinal uses. But what does all this have to do with trees? Fungi are the recyclers of the planet. They decompose materials breaking them down into their base constituents releasing the compounds contained within them.

Fungi have been found in just about every variety of environment, including the ocean floor, and there are even fungi that can eat rock. A main source of food for many types of fungi is woody vegetation: trees. So fungi eat trees, surely that makes them an enemy of trees? Not necessarily. It is important to understand the feeding habits of tree fungi. Some fungi only eat dead trees or dead branches, these are known as saprophytes.

Fungi friend or foe? What do you think?

Some kinds of fungi, known as parasites, eat live trees. Some do both; killing the tree and then hanging around to eat it afterwards. In each instance plant material is broken down into compost which enriches the soil which is then used again by plants. Fungi and plants also have a balance of gas exchange. Plants use carbon dioxide and release oxygen. Fungi use oxygen and release carbon dioxide. This type of relationship is known as symbiotic; each side benefiting from the partnership.

Another symbiotic relationship plants and fungi have is via mycorrhizae.

This is a special type of fungi that join onto to tree roots. The fungi effectively increases the overall volume of the trees’ root system, increasing its ability to gather water and nutrients. The presence of the mycorrhizal fungi on the roots also helps to ward off any attacks by other fungi. The mycorrhizae benefits by receiving some of the carbohydrates (or food) that the tree stores in its roots. The reliance of trees on mycorrhizae associations are still being discovered and it is thought mycorrhizae plays a significant role in the health of a tree and entire ecosystems.

The benefits of fungi go on and on and I have included some further reading at the end of this blog for those who are interested. But what should you do if you see a mushroom growing on or near your tree? The first thing to do is to identify its species, an arboricultural consultant can help with this. This, coupled with the species of tree, will identify the decay strategy of the fungus and any measures that need to be taken. Some tree and fungi relationships can happily continue for years, other can mean that the tree could fail.

To boost the mycorrhizae in the soil adding wood mulch around the base of the tree will help improve growing conditions for them. In extreme cases where soil has become denatured mycorrhizal solutions can be added to the soil.

For further information about the benefits of fungi see:

Pro Climb was founded on the idea that trees require the utmost respect and care and are an asset that can enhance your property. With that in mind, we scoured the country looking for tree contractors … END_OF_DOCUMENT_TOKEN_TO_BE_REPLACED